When it comes to social media, lately I’ve been surprising myself by how often I’m turning to LinkedIn. With the addition of LinkedIn Publishing, there seems to be more awesome content on the business social network than ever before.

I don’t think I’m alone. LinkedIn has more than 347 million users across more than 200 countries and territories worldwide.

For instance, did you know that 80 percent of LinkedIn users say they want to connect with companies? Which is great news, because users are almost 50 percent more likely to buy from a company they engage with on LinkedIn.

I thought I would share all the stats I’ve found with you here in the hopes that we can fine-tune our LinkedIn marketing and improve our LinkedIn Company pages together.

1. Only 57 percent of companies are using pages

A first interesting fact about LinkedIn Company pages is that there’s still a bit of room to stand out by taking maximum advantage of yours.

Although LinkedIn reports that more than three million companies have created Company Pages, that doesn’t mean everyone has one.

In fact, Forbes reported that company page usage jumped from 24 percent to 57 percent in 2014—which means a growing but still relatively small number of companies are reaping benefits here.

“It is crazy to not create and use a LinkedIn company page,” LinkedIn consultant and expert Wayne Breitbarth says in the Forbes article, calling it “free money” for small- to mid-size companies.  (And a big win for search engine optimisation, since Google crawls LinkedIn company pages and generally returns them in the first few page results).

A look at the Company Page features marketers are using most shows similar opportunity in terms of taking advantage of all the functionality LinkedIn provides:

What it means: If you haven’t created a page for your brand yet, it might be a great time to set one up and begin to experiment with all the options there.

In a study of more than 5,000 businesses, HubSpot found that traffic from LinkedIn generated the highest visitor-to-lead conversion rate at 2.74 percent —277 percent higher than Twitter (.69 percent) and Facebook (.77 percent). 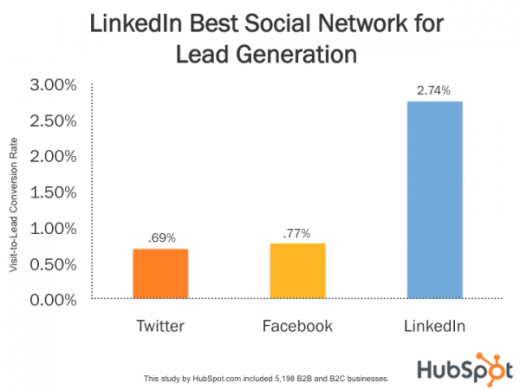 LinkedIn’s conversion rate also outranked social media as a channel overall—meaning that of all the traffic to these business’ websites via social media, .98 percent of that traffic converted into leads, compared to LinkedIn’s 2.74 percent.

What it means: While LinkedIn may not drive the most engagement on social media (see below), it does seem to drive targeted and qualified traffic interested in doing business.

Forrester analysed the top 50 global brands’ activities across social media platforms to determine that LinkedIn has an engagement rate of 0.054 percent. (Engagement rate is users’ interactions with a brands’ posts as a percentage of a brands’ followers)

What it means: If you’d like to benchmark your social media efforts on LinkedIn, try for an engagement rate of .05 or higher. Then you’ll know your strategy is above average!

LinkedIn has shared in the past that the Company page updates getting “the most action” are company branding updates such as inside looks and interviews, followed by job postings, tip and fun facts. 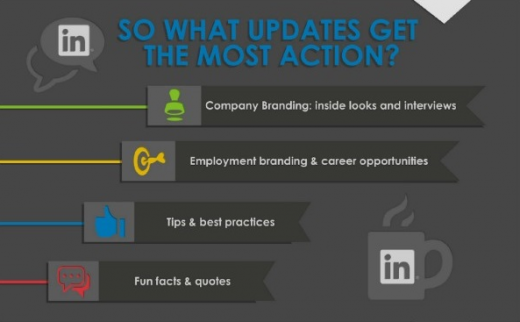 Beyond those overall content categories, there are also some cool and really specific ways to up your engagement rates a bit. Here are the six best data-backed tips I was able to unearth.

LinkedIn has determined that updates containing links get up to 45 percent higher follower engagement than updates without links. 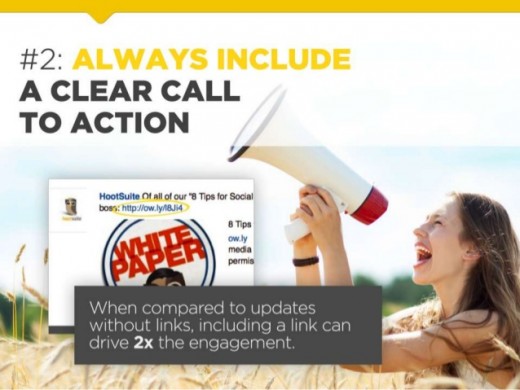 3. Questions get double the comments

Posting images has been shown to result in a 98 percent higher comment rate. 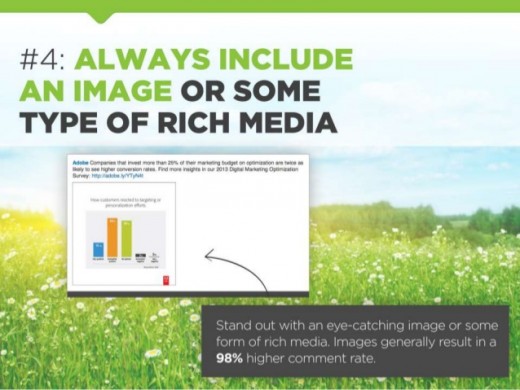 LinkedIn found that employees are 70 percent more likely to engage with a brand’s company updates. Don’t forget to include and encourage your whole teamin your social media strategy!

Much in the same way that video is growing a ton on Facebook, it’s gaining on LinkedIn, too.

Links to YouTube videos, which play directly in the LinkedIn feed, can result in twice as many amplification actions (likes, shares, and comments) and a 75 percent higher share rate. 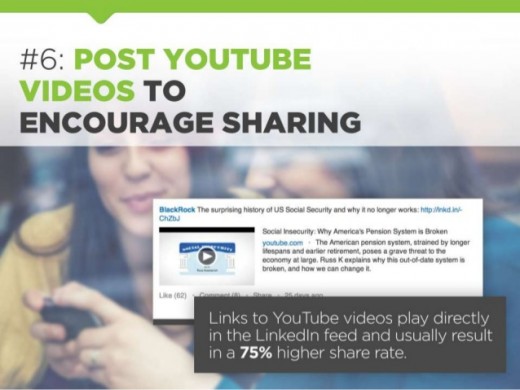 One more great resource: Check out LinkedIn’s slide deck of the best Company Pages of 2014 to get more tips on what tactics and strategies are working best when it comes to Company Page updates.

Finally, here are a few overall LinkedIn marketing stats that might help guide your social media strategy on this important network.

One stat I uncovered researching this article is that users spend an average of 17 minutes on LinkedIn per month.

Then I discovered that more than 50 percent percent of LinkedIn users spent more than two hours a week on the site in 2014–a figure that’s up about 10 percent from the previous year.

It seems like perhaps there are two different types of LinkedIn users: the check-in-infrequently type user and the very engaged, almost daily user.

This makes sense to me–in different stages of my career and work responsibilities, I’ve been a member of both of these groups. Have you?

2. Groups could be decreasing in popularity

Another element of the survey I mentioned earlier, reported by Forbes, focused on the popularity of Facebook Groups.

In 2013, 60 percent scored LinkedIn Groups as one of their favourite features of LinkedIn.

In 2014, “Posting and/or participating in Group discussions” was cited as helpful by 42 percent of those surveyed and “Searching for people in Groups” only by 26 percent. 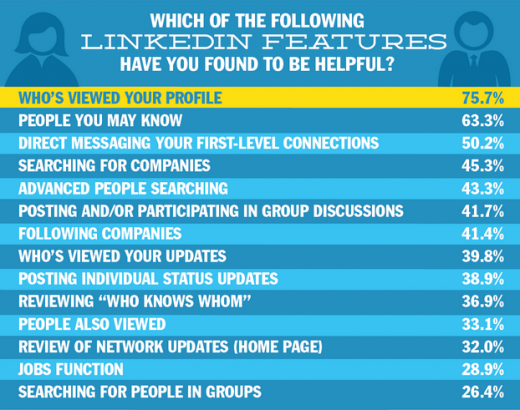 Based on this survey, it seems as if Groups are perhaps losing a bit of their popularity. Have you noticed this at all?

Have you ever wondered who’s not on LinkedIn? The site is so ubiquitous I sort of assume everyone is already there, but it continues to grow at a rate of more than two new members per second.

So who are these newcomers? Well, many of them are from outside the U.S.—the source of more than 75 percent of new members in the last quarter of 2014.

But LinkedIn’s fastest-growing demographic is students and recent college graduates. More than 39 million of them are on the site now!

I hope this post has revealed how powerful a social network LinkedIn can be for your business, and with a few tweaks to how you talk to your audience, you could be maximising engagement in no time.