The 29 rules of social media – and which ones to break

The 29 most common social media rules

After digging into a bunch of research from thought leaders and influencers, I found there seemed to be a set of social media rules that most could agree on. Here’s the list of 29 social media rules most commonly mentioned by the pros.

(Thanks to HubSpot, TollFreeForwarding and Gryffin, Rebekah Radice [1] [2],Chris Brogan, and Outbound Engine for their great resources and inspiration on these social media rules.)

For all social networks

1. Share several times a day, but space out your posts every few hours.

2. Respond to all comments as quickly as you can.

4. Always keep the 80/20 rule! Entertain and inform your audience first, sell to them second.

5. Use first person plural when talking about your company brand (We, Us).

7. Don’t use all 140 characters. Give people room to retweet with a reply.

10. Don’t stuff your tweets with keywords.

12. Don’t post or tag photos of fans, customers, or employees without permission.

13. Don’t tag people or pages that aren’t relevant to your post.

15. Personalize your connection requests. Tell them WHY you’re connecting.

16. Once connected, send a “welcome” message.

18. Don’t ignore the more professional tone of the network.

19. Always +mention users when commenting on their posts.

20. When sharing a post, always add your own commentary to it first.

22. Use Google+ formatting for your text—bold, italics, and strikethrough.

23. Don’t neglect to provide good descriptions for your pins.

24. Always link back to the original source and give credit.

25. Don’t use images that have nothing to do with your clickthrough content to get more pins or clicks.

26. Don’t pin just your own material.

28. Don’t overgram. No one likes their feed filled up with one user.

29. Use hashtags for your brand appropriately. The golden number of hashtags is 11.

Rules for all social networks

Share several times a day, but space out your posts every few hours.

Research has shown that bursts—moments when you flood your followers’ timelines with several updates sent back-to-back-to-back—are one of the most significant factors in unfollowing. To combat this, you can use a social media scheduling tool like Buffer to space out your posts. 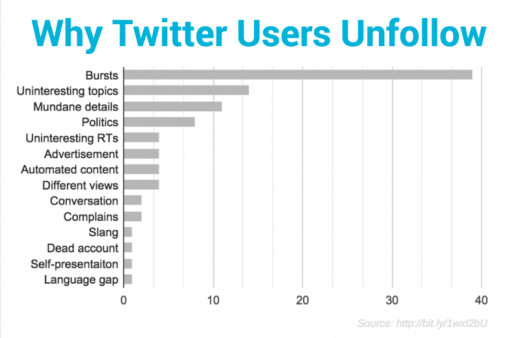 Respond to all comments as quickly as you can

A social media study found that 53 percent of users who tweet at a brand expect a response in under 60 minutes. Twitter is the most real-time of the social networks. Timely responses are imperative on Twitter and highly encouraged everywhere else.

Know the art of the hashtag. 1 hashtag is fine. 10 hashtags are not.

How many hashtags is too many? The Next Web recommends 1-3 hashtags per post, across all platforms. It’s a good rule of thumb to start with; you might find your mileage varies depending on the different networks.

From what we’ve been able to research and learn about hashtags,

The takeaway here: Hashtags are great for added engagement and visibility, almost all the time. The ideal number of hashtags seems to vary greatly. Feel free to test and iterate for yourself.

Always keep the 80/20 rule! Entertain and inform your audience first, sell to them second 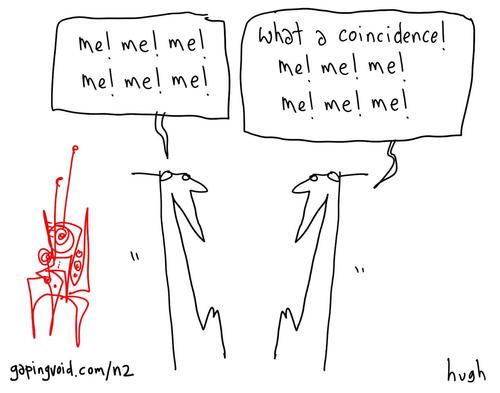 We’ve covered the many different ratios you might try for your social media sharing—the 4-1-1 rule, the Rule of Thirds, the Golden Ratio, etc.—and one thing they all have in common is an emphasis on sharing others’ content more than your own.

For many, this will be a great strategy. For our social media sharing at Buffer,we’ve tried the opposite advice, sharing 90 percent of our own content and 10 percent from others. We’ve yet to see a negative impact on engagement.

Use first person plural when talking about your company brand (We, Us) 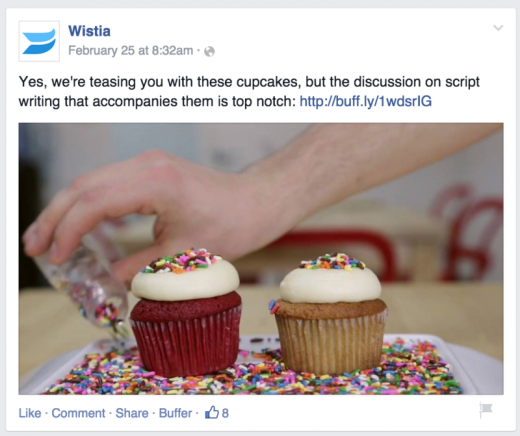 There’s a time and a place for good social media automation, and direct-messaging new followers doesn’t appear to be it. A popular practice in the earlier days of Twitter, auto-DMs now are easily identified by users as inauthentic messaging.

Don’t use all 140 characters. Give people room to retweet with a reply.

The ideal length of a tweet is 71 to 100 characters, exactly for this reason. If a person chooses to manually retweet you (copying the text from your tweet and typing RT: at the beginning), they may want to add a personal note or message to your original tweet. Keeping the length below the 140-character limit makes this easier.

HubSpot has some great advice for this one:

When you see companies create well-performing hashtags, don’t hop on their hashtag train to promote irrelevant content — it devalues their hashtag and, as a result, your brand.

Betaworks data scientist Gilad Lotan ran an experiment on this exact rule, paying $5 for 4,000 Twitter followers. He found that doing so felt quite off—sleazy even. Still, the final outcome for the experiment actually led to positive Twitter growth for Gilad.

I do believe that acquiring just the right amount, as much as I hate to write it, may have a positive long-term effect on acceleration of growth and visibility.

This would make for an interesting ethics debate, right? Just because a strategy works on social media, does that mean it’s okay to use? How do social media rules and etiquette factor in? Buying twitter followers feels a bit underhanded and unethical to me. I’d love to hear your thoughts!

Don’t stuff your tweets with keywords.

How would your tweet sound if you were to say it face-to-face to a friend or coworker? This seems to be a good measure of the right balance of keywords.

Liking your own post has the potential to surface the content again in the News Feed (first when you publish, and again when you Like) and to kick off engagement from others. That being said, doing so tends to send a rather desperate, unsavory message to those who catch on.

Don’t post or tag photos of fans, customers, or employees without permission.

Many sites recommend getting written permission before going ahead with posting and tagging photos of others on your Facebook page. There’s likely to be very valid privacy concerns that could arise if brands aren’t careful in this area.

Don’t tag people or pages that aren’t relevant to your post.

People and pages who are tagged in Facebook updates receive notification of being mentioned; some folks use this as a simple hack for getting added attention on the content they publish. Again, this is one of those tactics that might work well yet doesn’t feel particularly great.

Previously, the social media rule for this one was: Only ask people to like your status if you are doing a poll, i.e. “Like this post if you’re a dog person, share it if you’re a cat lover.” Asking for likes, comments, or shares is one of the factors thatthe Facebook News Feed considers when it decides what content to show. Promotional text like this lowers the visibility of your content.

Personalize your connection requests. Tell them WHY you’re connecting. 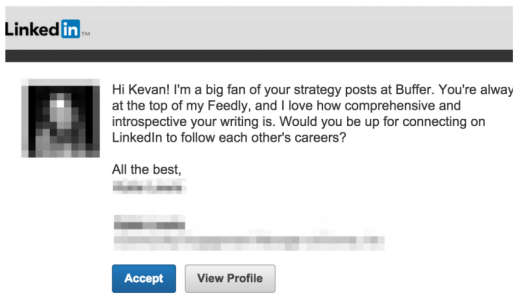 Personal requests tend to be noticed and appreciated—and accepted!—moreso than a simple generic request.

Once connected, send a “welcome” message.

In my experience, this one happens quite rarely—although the effect can be great! If you get a lot of LinkedIn requests, this might not scale too well; however, it’s possible to do this for a few connections at a time or for the occasions when you connect with influencers.

Groups are a great way to connect with others in LinkedIn (one of the benefits of Groups is that you can direct message any fellow group member, whether you’re connected or not). One of the best rules for LinkedIn groups is to respect the group dynamics. Share and engage before selling.

Don’t ignore the more professional tone of the network.

This one speaks to an even greater social media rule: Tailor your content and message for each specific network. LinkedIn in particular has a targeted demographic of business people and professionals. Content on the network does best when it fits that tone.

Always +mention users when commenting on their posts. 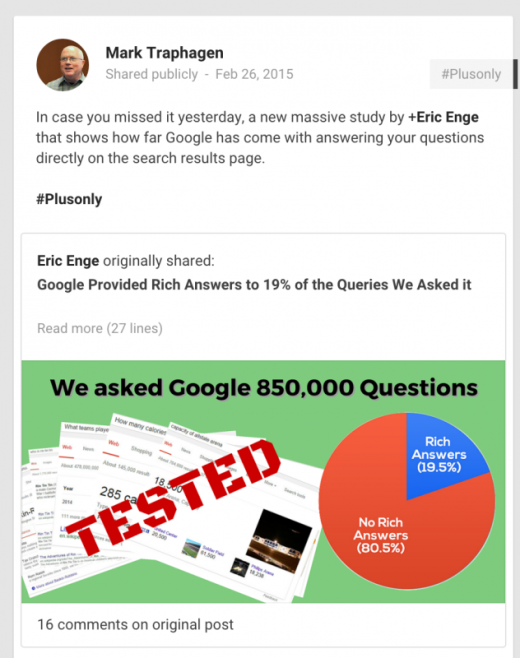 This helps the original authors follow along with the thread, and it’s a polite way to give attribution and credit where it’s due.

When sharing a post, always add your own commentary to it first.

Google+ posts are a real joy to read and write; they’re often more like mini blog posts than social media updates. The way that users compose these messages has a really neat art and science to it. One way I’ve noticed is that many people add their own thoughts about a topic first, followed by a horizontal line break (a series of connected dashes, usually), then the headline and link to the related article.

Sharing to a Circle is like Direct Messaging a particular group of people. Only those in the Circle will receive the notification and can view the content. It’s a useful way to share targeted content with a compartmentalized group of followers.

Use Google+ formatting for your text.

Here’s a quick guide on how to style your posts in Google+. 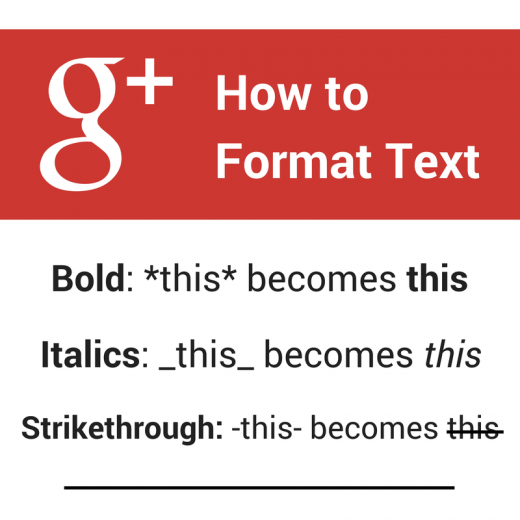 Don’t neglect to provide good descriptions for your pins.

Sometimes, in quickly pinning different images it’s easy to leave out the pin description. This is one of the key ways that new users can discover your pins, provided you compose a good description that’s rich in keywords.

Always link back to the original source and give credit.

Whenever we talk about images on the Buffer blog, one of the key areas to keep in mind is proper attribution. Images tend to get passed around lots online, so it’s always best to track back to the original source so that they get credit for their creation.

Pinning from the original source, rather than somewhere that syndicated or republished the image, is always best.

Don’t use images that have nothing to do with your clickthrough content to get more pins or clicks.

This Pinterest hack may bring in clicks, but they’re not likely to be valuable, sticky traffic nor are the new visitors to leave with a very good impression of their experience.

Don’t pin just your own material.

Instead, you can create individual boards that highlight your blog posts or content. Beyond that, pin from a wide variety of sources.

Here’s an example of what we’ve done for our marketing tips posts from the Buffer blog. 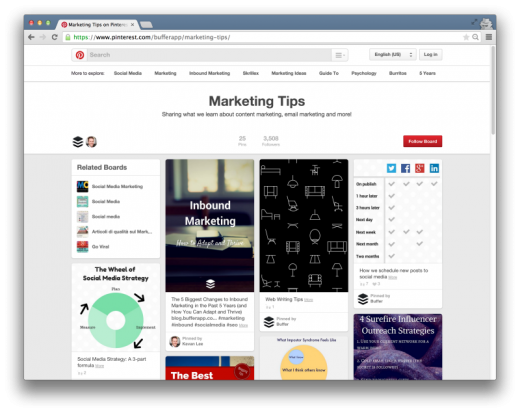 Similar to to Facebook, asking for Likes is not recommended, although instead of impacting your photo’s visibility (there’s no News Feed algorithm for Instagram), the impact is likely to be felt on your brand’s professionalism.

Don’t overgram. No one likes their feed filled up with one user.

In our research into ideal frequency for social media, Instagram was one that didn’t have as concrete of a standard. One research study found that majorbrands post an average of 1 to 2 times per day. At the same time, brands that post 10 or more times per day continued to see positive engagement growth even as frequency grew.

Use hashtags for your brand appropriately. The golden number of hashtags is 11. 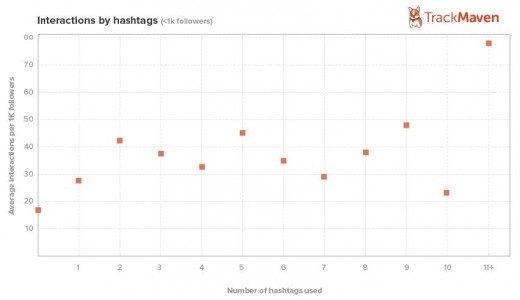 As mentioned above, you can often get away with more hashtags on Instagram than any other social network. Track Maven’s study of Instagram hashtags found that interactions were at the highest on images when 11 or more hashtags were used.

The best part about this recommendation is that the data comes from a set of users with 1,000 or fewer followers—a group that likely includes small businesses and those just diving in to Instagram. In other words, hashtags could be your best bet for growing a fast following on Instagram.

It’d be amazing to hear about your experience with some of these. Feel free to leave your thoughts here in the comments.